Of nomads, tomatoes, and a neighborhood 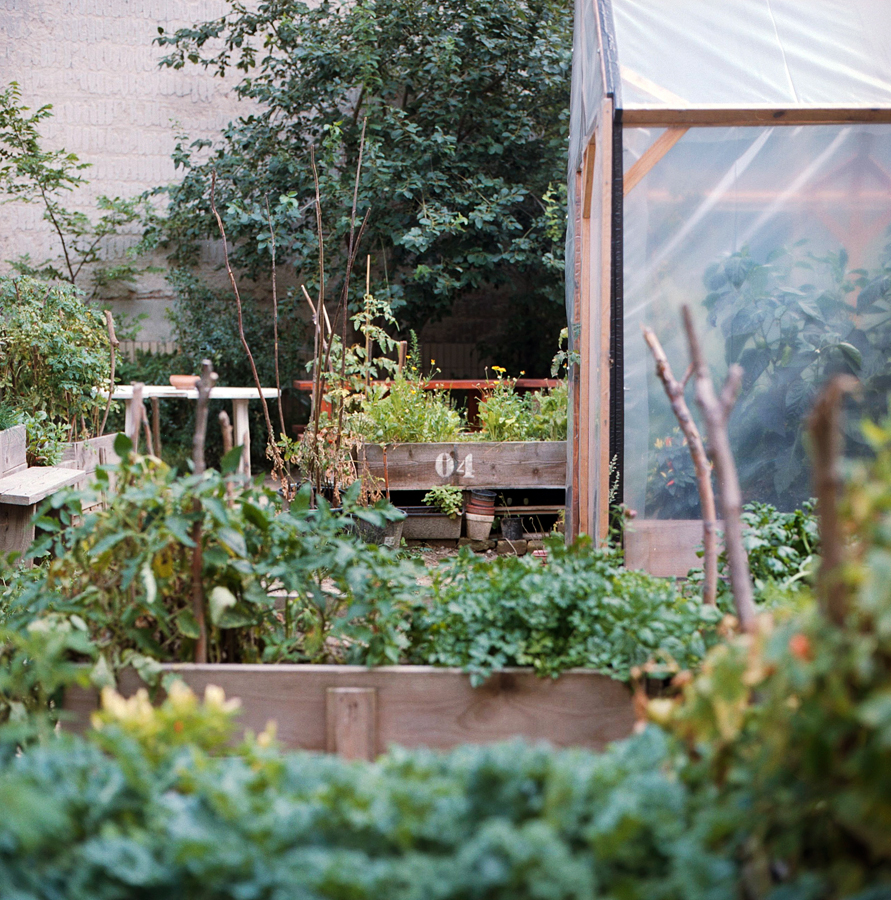 It all seemed a bit abstract, when a friend of a friend I didn’t even know personally told me about the idea, all via the bubble of the social network. She wrote I should join her and a bunch of friends to help them clear an empty plot and prepare it for a community garden. “So the hip concept of urban gardening finally arrived over here”, I was a bit cynical first. But apart from sounding like a nice exercise of spring cleansing, it indeed was quite tempting to plant the seeds for a little green revolution right next to the crumbling concrete tower of the local police directorate. A rad idea, even more so as it has always been my dream to sort of subvert the “nothing goes” attitude seemingly prevalent among locals in relation to their city. Besides, I had collected quite some vegetable seeds during recent travels, that I wanted to give a try growing.

So there we went, shovelling and paving, sawing and hammering, growing and exchanging seedlings, coordinating the watering, and seeing it all grow. What we did felt like a genuine act of city-making from the bottom, carried out by a diverse group of people following the altruistic motto ‘You get what you give’. In relation to Bratislava, we created a space of the possible, forming an opposition to the dominance of rampant development and lack of city planning and administration. Furthermore, the space we created was inherently democratic, its functioning as well as its very existence based on grassroots negotiation between different urban actors. In popular urbanists’ terms borrowed from the French philosopher Michel Foucault, we could also see our garden as a ‘heterotopia of compensation’: a space that is other,  providing what cannot be found elsewhere in the city. Moreover it functions in non-hegemonic conditions and is decommodified, therefore representing use value.

In relation to Bratislava, we created a space of the possible, forming an opposition to the dominance of rampant development and lack of city planning and administration.

One balmy summer night – I think it was during our second gardening season – I saw a guy with a dog, who seemed a bit lost wandering around the closed park Medická záhrada. As he carried a large travel backpack with a sleeping bag, I somehow felt he might be looking for a place to have a rest. So I approached him, and he told me he just gave up his residence in Bratislava, but missed his train. It’s been three years since he quit his job in a multinational corporation and started to live like a nomad, roving around in the wider region. When he arrives in a new village, he tries to find its oldest inhabitant and offers to help with everyday tasks for a few days. Usually people are glad about his proposal and provide accommodation and food in return.

It seemed just natural for me to offer him to sleep in the beautiful wilderness of our community garden. And likewise, he seemed glad to take that offer. Showing him the way through the sleeping city, I found many parallels between his story and the place, where he was about to crash for the night. After all, our garden is a nomadic concept too – not based on owning land, but cultivating it, as long as the necessary resources are given at a certain place.

Often people stopped by in our garden. Though they usually weren’t looking for a spot crash for the night, but simply interested in what we were actually doing on that plot of land, that according to market logics was considered to be an ‘urban wasteland’. One morning I met a group of secondary students in our garden. They came from Chișinău, brought to Bratislava by an excursion, where they were introduced to some civic initiatives, our garden being one of them. And as I was just watering my tomatoes, they invited me to tell a bit about my experience with the garden. We had an inspired chat, and they seemed quite surprised when I told them, that I grow my tomatoes from seeds I brought from places not too far from their home, with ‘Tiraspol’ or ‘Odessa’ written on their labels. When they were leaving our garden, the students even invited me to join them on their way back to Chișinău the next day. After all they had some empty seats in the bus, and I could use the opportunity get some seeds from their home city.

Traveling extensively in countries anywhere east of where I was born, I also began to appreciate the rich diversity of vegetables I encounter at most places I visit. And once you leave the territory of EU, the selection of local produce to encounter gets even bigger.  In this regard, I got especially fond of the colourful varieties of tomatoes, as they are cultivated all across the former Eastern Bloc. Interestingly, originally tomatoes spread from West to East – native to South and Central America, over centuries they sort of migrated to the west. Though, today in the EU the rather little diversity remaining is threatened, be it through disputed legislations on the trade and distribution of seeds, the growing hegemony of hybrid seeds, or the subsidized dominance of the infamous ‘Almería tomato’ in supermarkets from Tallinn to Bucharest. All that contributed to my idea of sort of re-injecting a bit of biodiversity from outside the EU borders, by simply collecting seeds while traveling and growing them over here. Furthermore, I found it could also be a symbolic gesture against the restrictive asylum policies held by countries like Slovakia, even before the ‘refugee crisis’ started. Connecting these two threads, the little project ‘Green Migration’ was born, paving the way for Odessa’s ‘Anna’ and Tiraspol’s ‘Black Prince’ to our garden.

I enjoy our neighborhood for its calm, low-key vibe, far from any hype. Tucked between a park, the court and a cemetery, its structure is mainly residential, though catering for all basic vital desires. The predominantly interwar tenements are arranged in a varied urban pattern with rather few ruptures, one of them being the plot of our garden. Apart from a few roof extensions and a shiny white apartment complex, which is still more than half empty after two years, signs of gentrification appear rather subtly. After all, it seems that there are still plenty of opportunities for the scavengers to roam around with their shopping carts, stuffed with layers of cardboard, plastic bags and little treasures they find around the streets. Though they might be irritated by the increasing traffic of mostly black SUVs in the neighborhood, some of them driven by the clientele of the two glamorous beauty salons, which opened a few years ago. They are located just a stone’s throw from each other and around the corner from an long-established veteran in the business. In the latter, a resolute lady in her sixties still offers basic beauty care at unrivaled prices displayed on a yellowed sheet of paper posted on a barred shop window. But what might be equally important to her customers is the latest gossip from around the blocks that she offers as an extra value of sorts. And as I am writing this text, there might even be rumors circulating about the plot:

“Have you already heard about the new apartment block to be built next to the police directorate?”
“No, but I was wondering what happened to the garden there – it seems like it vanished, or did it move to another neighborhood?”